Weighing in at less than 70 grams, this contestant packs mean right and left hooks with top performing buttons, while its footwork is controlled by the best PWM sensor on the market. Truth be told, it's not like we specifically aimed for DM6 to weigh 69 featherweight grams… Alright, we did do that. But do you know what was done to slim Holey down? DM6 has undergone a rigorous dietary regime, shedding the weight where it was unnecessary while keeping its muscle, so you can always be certain it's ready to fight for the top!

There is no surprise that most mouse manufacturers try to find the absolute best components for their mice. It's only logical - how else can you rise above the rest? Thus, we opted for the “tried and true” top switch performer - Huano. These bad boys not only are extremely satisfying to click, they will also last you for 20 million of them. To put that into perspective - it's a few good years of heavy usage, so there is no need to pull your punches!

Equipped with our hit feature – the shoelace cable. Forget batteries, forget lag or connectivity issues, forget stiff cable drag or weight getting in the way. Join us and embrace the best of both worlds!

Top of it's class - 69 lightweight grams of pure power provided by PixArt sensor and Huano switches. What you get with DM6 is a “no compromise, best value” performer out there. But you don't have to believe our words - square off with the DM6 now and feel the “HOLEY POWER” yourself as you fight your way to the winner's circle! Beat your competition to the punch! 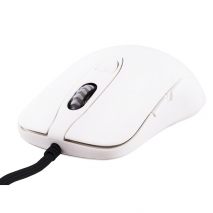